Considering I am living in the middle of a snow-covered New Jersey, and today is a snow day, I want to talk about a very famous ballplayer in baseball history who had the nickname "Snow".

Fred "Snow" Snodgrass is not the best player of his time, but he is certainly remembered by all Giants fans. His career spanned from 1908-1916 with the New York Giants and Boston Braves. He hit for a .275 lifetime batting average with 852 hits. His one good year came in 1910, when he hit .321 with 127 hits. However, since the 1912 World Series, a lot of baseball fans know who he was. Here's why:

It was the bottom of the tenth at Fenway Park in Game Eight ( it was a nine-game Series back then) of the 1912 World Series: Giants vs. Red Sox. With the Giants up 2-1 in the game, pinch-hitter Clyde Engle leads off the frame for Boston with an easy fly ball to Snodgrass in centerfield. However, despite how easy it would have been for Snodgrass to catch the ball, Fred dropped it instead! (Maybe he dropped the ball because it looked like a snowball? Now I might understand his nickname!) This allowed Engle to reach second and eventually score later in the inning. With the game tied 2-2, the Red Sox ended the Series when Larry Gardner hit a sacrifice fly to right, which allowed Steve Yerkes to score from third. The Giants lost their second consecutive World Series, all because of a muffed fly ball by Snow. 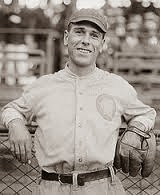 Although Snodgrass's error is one of the most infamous errors in baseball history, everybody makes mistakes, including ballplayers. "Snodgrass's Muff" (as it came to be called) is just one of the many examples of how we are all just human. Anyway, thanks for reading this post. I hope you enjoyed it and check back in a few days for more of "all the buzz on what wuzz."