Most pitchers in baseball history are meant for pitching (obviously). However, before the creation of the designated hitter rule in 1973, every single team in the MLB had to have a pitcher somewhere in the lineup. Even though every American League team has to have a DH in the lineup today, there are still pitchers who are in the lineups of National League teams as well as AL teams playing interleague games in NL ballparks. The reason I'm telling you all of this is because I want to share with you that some pitchers were actually able to hit. With that, let me tell you a couple of names and their stats.

Carlos Zambrano can really swing the bat, which isn't always a good thing, especially during his outbursts. However, he usually uses his skill for good. In his career, he has batted .242 with 22 home runs, the most home runs in a career by an active pitcher. When Yankee fans hear the name Don Larsen, it is music to their ears because of his perfect game in Game Five of the '56 Series, but he also could swing the bat, hitting .242 lifetime with 14 homers. In 1958, he hit four homers and 13 RBIs with a .306 batting average. 208-game winner Carl Mays hit a career best .343 in 1921 with the Yankees with 22 RBIs.

Now, don't think Hall of Fame pitchers couldn't also swing the bat. Red Ruffing leads all pitchers in hitting WAR with 13.7 with a whopping 36 career homers. Bob Gibson hit 24 career homers in St. Louis along with 144 RBIs. However Early Wynn did a little bit better when it came to RBIs, driving in 173 runs. Don Newcombe batted .271 lifetime with 238 hits, while Bob Lemon had 274 career hits. Warren Spahn hit 35 career dingers and Walter Johnson batted .433 in 107 plate appearances at the age of 37 in 1925!! It is the best single-season batting average for anyone with at least 107 plate appearances in a season. 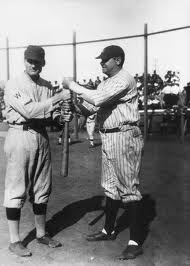 So, as you can see, most pitchers back in the day weren't that bad at hitting. It's too bad that they were better known for their work on the mound than at the plate. Anyway, thanks for reading this post. I hope you enjoyed it and check back in a couple of days for more of "all the buzz on what wuzz".
Posted by Matt Nadel at 7:55 PM