My Visit to the Sports Immortals Museum 1/6/13

During the recent break, I went to Florida to visit my grandparents, Aron and Salome, and I visited the Sports Immortals Museum in Boca Raton, Florida. There, I got to look at 1% of the biggest collection of sports memorabilia in the world (the rest is in special storage vaults). Let me tell you, the place was super-impressive! The museum had everything from all areas of sports, from a life-size picture of the 1992 Basketball Dream Team (see the picture of me below with the Dream Team), to Muhammad Ali's boxing gloves, to Jim Thorpe's uniform. However, what I marveled at the most was, obviously, the baseball stuff. The museum is home to one of only four $2.8 million dollar Honus Wagner baseball cards in the world. It is also home to a giant baseball bat which was signed by over 50 Hall of Famers! Anyway, at the front desk, I got to meet the man who founded the museum, Joel Platt (see picture below)! He was a very nice guy. Let me tell you a little about what he did to get all the sports memorabilia. 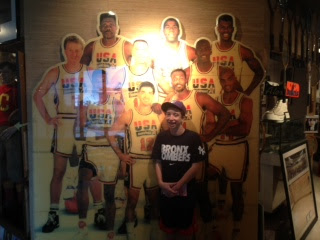 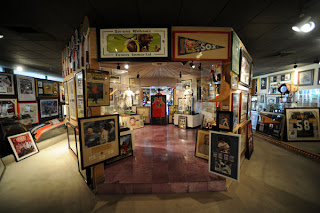 Platt really started his collection around the time he was in high school in the '50s. From there, it evolved into him and his son going all over the United States, trying to collect as much as possible. Joel eventually started the Sports Immortals Museum which, as I said before, is located in Boca Raton, Florida. The Museum has four goals: to keep the legacy of the greats in all sports history alive, to make enshrinement as a Sports Immortal one of the great achievements in sports, to make a foundation that would help advancements in sports medicine research and related organizations, and to inspire every visitor to strive to do their best and put in as much effort in his or her life as possible.

Anyway, Joel is currently trying to get funding for a planned gargantuan super-awesome new Sports Immortals Museum. From looking at the plans, it kind of looks like a giant rocket ship. I also saw a video, and it looks like it will be really great!! Right now, Joel is negotiating with a bunch of major cities about the project. Well, I was able to get Joel to answer some questions for me and here's what he had to say:

Matt: What is the favorite baseball memento in your collection?
Joel: There are so many great items in the Sports Immortals Collection it is difficult to choose. However, I will mention two of my favorites:
- An autographed baseball dated October 1, 1932, the day Babe Ruth called his shot against the Chicago Cubs in the 1932 World Series. The baseball is signed by Babe Ruth and Lou Gehrig, who both hit home runs that day. The ball is also signed by Arthur Fletcher, who was a coach for the New York Yankees in 1932. The ball is definitely from that game and possibly could be the ball that Ruth hit, though it would be difficult to prove. The fact that the ball was signed by Ruth and Gehrig and dated October 1, 1932 is significant. The ball came from the estate of Arthur Fletcher.
- The “Double No Hit Ball.” This was the last ball used in the double no hit game in 1917 between the Chicago Cubs and Cincinnati Reds. Both pitchers threw no hitters for nine innings (John “Hippo” Vaughan for the Cubs and Fred Toney for the Cincinnati Reds). In the 10th inning the Reds finally scored a run, winning 1-0. Jim Thorpe played right field for the Reds and drove in the winning run. Fred Toney was the winning pitcher. The ball was signed by Fred Toney with the details of the game. Years after Fred Toney died the ball was obtained for the Sports Immortals Museum from his widow.

Matt: What was the toughest baseball mementos to get and how did you get it?
Joel: The toughest mementos to get took eight years to obtain. An old time sports writer by the name of Bob Curley had written a story about Ray Chapman, the famous Cleveland Indians shortstop who died after being hit by a Carl Mays submarine pitch in 1920. Chapman is the only major league baseball player to die during a game. The Museum has the actual "death ball" and Chapman's bat.

Matt: What baseball memento do you wish you had?
Joel: In my million miles of travels to curate over one million mementos, one of the only mementos to get away was the complete uniform Lou Gehrig wore on Lou Gehrig Day. In the late 1970’s, I received a call from a college student who needed money to pay his college tuition. He told me his father had left him Gehrig’s uniform and if I was interested, he would sell it to me for $25,000.00. This was a large amount to pay in the 1970’s due to the fact that sports collectibles had not begun to be seen as having great monetary value. However, being sympathetic to his needs, I offered him $23,000.00. He hung up saying he would consider the offer. Ten minutes later I called him back to say I would send him a check for $25,000.00 when he informed me he was so sorry, but that he made a call immediately after hanging up with me and sold the uniform for $25,000.00. He said he was sorry because he really wanted me to have the uniform for the Sports Immortals Museum Collection.

Matt: Since you're such a big sports fan, who do you consider the best hitter and pitcher ever?
Joel: In response to your question about who was the greatest hitter and baseball pitcher ever, my answer would be as follows. My answers are based on my million mile journey to meet the greatest players, my interviews with former greats and personally seeing many of the greats from 1947 to the present.
-In my interviews with Satchel Paige, he stated Ted Williams and Stan Musial were two of the greatest, but the greatest hitter he ever faced or personally saw was Josh Gibson, the great Negro League catcher for the Homestead Grays. Josh was referred to as the black Babe Ruth.
-In my personal opinion, the greatest hitters of all time would include Ted Williams, “Shoeless” Joe Jackson, Babe Ruth and Ty Cobb. Roberto Clemente would get my vote as the greatest all around player for hitting and fielding. His arm was unquestionably the best and he could run like a deer. My vote for the greatest pitcher of all time would include both Satchel Paige from the Negro Leagues and Walter Johnson in the Major Leagues.  In an interview with one of Johnson’s old catchers, Eddie Ainsmith, Eddie told me that hitters used to be scared to death to face Johnson, because he could throw so hard. Once the sun went down and cast a shadow on the pitching mound area, Johnson became unhittable. Bob Feller, Warren Spahn, Sandy Koufax and Nolan Ryan are other greats that deserve mention.

Well, that's the interview. Thanks a lot to Joel Platt for being such a great host and interview. And if you're ever near Boca Raton, Florida, you should pay him a visit. Thanks for reading!
Posted by Matt Nadel at 7:28 PM