Hey Guys!
Sorry that the length of time between my last couple of blogs has been a little stretched out. They will be unstretched in no time! Here's the next blog about one of the greatest rosters in baseball history:

Have you ever heard of the great manager Connie Mack? In case you haven't, Mack managed the Philadelphia Athletics from 1901 to 1950! During that span, he led the A's to nine AL pennants and five World Series victories. When the clock struck 1929, a spark arose in the A's players, and enabled the team with an elephant as a mascot, to take it to a new level when they won the World Series that year. The 1929 A's were an excellent team, winning 106 games and losing just 46! Mickey Cochrane, the Hall of Fame catcher, batted .331 with 170 hits, along with 95 RBIs, and Jimmy Foxx (see "The other Babe Ruth" for more info on the Hall of Famer) batted .354 with 33 dinggers and 117 RBIs. Lefty Grove, the Hall of Fame pitcher, went 20-6 with a 2.81 ERA and a WHIP (walks+hits per inning) of 1.30. What an amazing team! Three Hall of Famers that helped the A's win a World Series against the Chicago Cubs! They won the next World Series too, but I'm talking about 1929, not 1930. 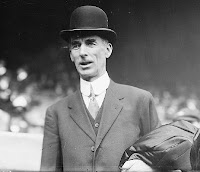