Check out my survey that I put at the bottom of my blog homepage! Anyway, here's my next blog:

Most of the great teams in the first half of the 20th century were part of the Yankees' and A's history, so I want to talk about a team that was expected to get clobbered in their division, but actually won the World Series, the 1960 Pirates! Led by a young Roberto Clemente, Bill Mazeroski, and Dick Groat, the Buccos crushed NL pitching and ended the season with a 95-59 record(the league didn't play 162 games until 1961.) Groat won the MVP Award, as the Pirates took on the Yanks in the World Series. In the 7th game, the unfavored Pirates were tied 9-9 in the bottom of the ninth. Bill then crushes a game-winning shot to win the Series. It was the first of two homers to end a World Series (Joe Carter did it with the Jays in '93) and it gave the Pirates their first championship! It was even more impressive that they beat the Yankees in the World Series. Well, they may have had scurvy, but they still pulled out a Series win. 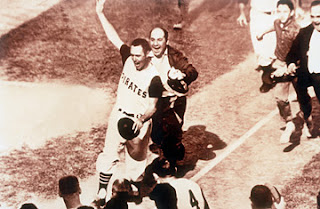