An Interview with Curt Schilling (the "Schilling-shot") 1/2/13

I have another great interview for you today! This interview is with the should-be Hall of Famer......Curt Schilling! You probably already know who Curt is, but in case you don't, let me tell you a little bit about him.

The Alaska-born Schilling played from 1988-2007 with the Phillies, Astros, Diamondbacks and Red Sox. His career record is 216-146 with an ERA of 3.46. He never won a Cy Young Award, but was in the top five in the voting for four years. A six-time All Star, Schilling pitched in four World Series: 1993 with Philly, 2001 with Arizona, and 2004 and 2007 with Boston. He won the two with Boston and the one with Arizona. He had an amazing 11-2 playoff record! Schilling is famous for winning Game Six of the 2004 ALCS against New York with an injured ankle. During the game, his sock got all bloody (see picture below), which is why we know the pitching performance as "the bloody sock game". I even wrote a blog on if I had a Hall of Fame ballot and I included Curt on my ballot (click here).  That's basically all you need to know about the great pitcher. So, without further ado, here is the interview:

Matt: I saw that when you were young, you and your family moved all over the country before finally settling in Phoenix, Arizona. Was it tough moving around so many times?
Curt: It really wasn't, because I didn't know any different. I was used to it and, to be honest, it did help me get ready for the baseball life, since all you do is move year to year.

Matt:  Who was your favorite baseball player growing up as a kid? What baseball team did you root for?
Curt: I grew up a Pittsburgh Pirates Fan. My dad raised me on the Steelers and Pirates. Roberto Clemente was the first player I remember cheering for at a young age. Nolan Ryan was my favorite pitcher. Willie Stargell was one of my favorites as well.

Matt:  Which team in all the playoff games that you played in did you think was the toughest to face?
Curt: The 2001 Yankees were the best team I faced in the post-season, and the 2001 Cardinals were very good as well.

Matt:  Which former players are your best buddies today and what do you guys talk about when you get together?
Curt: Gabe Kapler and Doug Mirabelli. We talk about the same things everyone else does: life and family.

Matt:  Were you and Randy Johnson close friends before you formed that 1-2 punch with him on the D-backs?
Curt: We had met only once before, the 1999 All Star Game. We didn't know each other very well until we became teammates.

Matt: Why did you create a charity for ALS ("Lou Gehrig's Disease)?
Curt: I met a person affected by ALS and thought that being in baseball, I could help.

Matt: Brad Cook, who introduced us, told me that you started a new league in the really cool Out of the Park (OOTP) baseball simulation game and are running one of the teams which you call the Iron Pigs. Are you interested in getting involved at the MLB level in ownership or management one day?
Curt: Not at all.

Matt: The only nicknames I found for you were Curt or Schill, which aren't that original. Given that you were an underdog when you pitched so well in the playoffs for the D-backs and the Sox and you sort of slayed the giants, I was thinking of a nickname like "Schilling-shot" (just like David used a slingshot back in the day to slay Goliath). What do you think?
Curt: It's definitely a unique nickname!

Matt: What do you consider your greatest MLB accomplishment?
Curt: Winning the Roberto Clemente Award in 2001. [Note from Matt: The award, given out annually since 1971, honors a player who best represents the sport through positive contributions on and off the field. The criteria includes their sportsmanship and community involvement.]

Matt: If you could have pitched for any team in history, who would it be and why?
Curt: The late 70's Pirates. I would have loved to have been a teammate of Willie Stargell.

Matt: Do you have any suggestions on getting the younger generation of fans more interested in baseball history?
Curt: It's a tough sport for younger fans to get into. It's hard to watch it on TV because of the length of the games, but once you understand the game, it's a blast to watch.

Well, there you have it: an interview with the great Curt Schilling. Thanks to Curt for agreeing to do it and a shout-out to Brad Cook for setting it up. 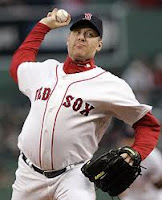 I have another interview that I will be posting soon, so check back in a couple of days for that. Hope you enjoyed reading this post and thanks for reading!