This summer here on Baseball with Matt will be devoted to ranking my top 50 Hall of Fame hitters of all time! I've always wanted to do a list like this because every time I read or watch a list of the top hitters in baseball history, I always have comments. Basically, the top 50 will consist of some of the greatest names of America's pastime, but you're going to have to stick around until mid-August to read the name "Ruth" (yes, he is in my top five). But to start off this series, this post is devoted to the top hitters who didn't crack the top 50. Trust me, these omissions were very tough, so these guys definitely deserve to be in my top 60. But the list is the top 50 Hall of Fame hitters in baseball history, so, in no particular order, here are the honorable mentions.

The Catchers: Carlton Fisk, Yogi Berra, and Roy Campanella
All Hall of Fame catchers. All with multiple All Star Games and seasonal awards. All regarded as some of the best ever from behind the plate. But all just missed the cut.

The Injury-Prone: Ralph Kiner and Hank Greenberg
Both of these sluggers could mash the baseball, but were both hampered by injuries that cut their careers short. But when your slugging percentage is more than double your batting average in multiple seasons, you deserve a shout out. 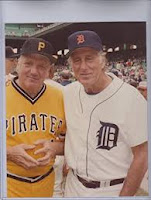 The Miscellaneous Cubs Hall of Famers: Andre Dawson and Billy Williams
Both of these guys were great hitters, don't get me wrong, but just didn't have the stuff for the top 50. However, with that being said, don't let their absences on my list detract from their Cooperstown worthiness.

I would just like to point out a common theme you'll see throughout the top 50 that you might've seen in these honorable mentions as well. I will not be playing the "what if" game, meaning that in the construction of this list, I never said "well, if blank happened, he would've had better stats." Just keep that in mind as you read the list (and specifically Ted Williams's name on said list). Anyway, who's excited for #50-46? I know I am. Thanks for reading this post and I hope you enjoyed it. Check back soon for more of "all the buzz on what wuzz."