A lot of baseball players tail off in terms of their yearly statistics after their early 30s, but that's not always the case, especially with these special players.

Willie Mays, Johnny Mize, and Barry Bonds
"The Say Hey Kid" and fellow Hall of Famer Mize are two of the oldest players to ever hit 50+ homers in a season. Mays hit 52 homers in 1965 at the young age of 34, while at the same age, Mize smacked out 51 bombs of his own in 1947. However, it is Bonds (pictured below) who is distinguished, having set the record for the most home runs hit in a single season with a whopping 73 in 2001 at 36 years young.

Tony Gwynn
Gwynn won four consecutive batting titles from 1994-1997... from the ages of 34 to 37! His 1994 performance is probably the most impressive of the bunch, when even though the season was shortened due to a players' strike, the Hall of Fame member of the San Diego Padres batted .394, the highest single-season batting average since Ted Williams's .406 batting average in 1941.

Pete Rose
Although mostly remembered for his time on the Cincinnati Reds, Rose actually had a lot of success with the Phillies as well. "Charlie Hustle" made four straight All Star Games for the Fightin' Phils from 1979-1982, even though he was 38 years old or older in all four years. And in those four years, he batted a solid .300 while also helping out during the Phillies World Series championship run in 1980.

David Ortiz
The greatest clutch player in Red Sox history had one of the greatest farewell seasons of all time in 2016. That year, at the age of 40, he set records for single-season homers and RBIs for a 40-year-old (38 and 127, respectively). Oh, and he also batted .315 that year while leading the league in slugging (.620, also a single-season record for a 40-year-old). 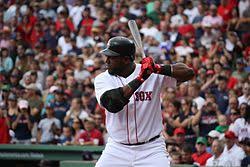 Jamie Moyer, Satchel Paige, and Nolan Ryan
No list of great geezers is complete without talking about these three pitchers. Moyer retired when he was 49 years old after playing for 25 seasons in the Majors, making his first career All Star Game at 40 years old in 2003. Paige played most of his career in the Negro Leagues, and didn't make his Major League debut until he was 41, but he actually made two All Star Games at ages 45 and 46 in 1952 and 1953 and didn't pitch in his final Major League game until he was 58. Ryan's (pictured below) career ERA at age 40 and after (he pitched until he was 46) was a respectable 3.33, while leading the league in strikeouts in four consecutive seasons and collecting career no-hitters #6 and #7.

What performances, am I right? If only more players could age as gracefully as these guys did. Thanks for reading this post and I hope you enjoyed it. Check back soon for more of "all the buzz on what wuzz."