January is almost halfway done, which means that we are almost halfway through one of the most inconsequential months of the year in terms of baseball-related activity. However, some (but not a lot) of baseball's most influential moments have come during the first month of the year and here is a list of some of those highlights that have occurred on this date, January 12th, throughout baseball history.

1961: Charlie Grimm and Verlon Walker were named to the Chicago Cubs' "College of Coaches." Basically, Cubs owner Philip Wrigley came up with the idea to hire a bunch of coaches who would take turns either being the team's manager or a coaching assistant and the coaches would rotate jobs throughout the season. The Cubs were managed by four different coaches throughout the season. None of them finished with a winning record individually and the Cubbies finished the '61 campaign at 64-90, a solid 29 games back of the first place Cincinnati Reds.

1983: "The Human Vacuum Cleaner," otherwise known as Brooks Robinson (pictured below), becomes the 14th player in baseball history to be a first-ballot Hall of Famer. Juan Marichal, the winningest Latin American pitcher in MLB history, with 243 career victories, was the other ballplayer of the 1983 Hall of Fame class.

1999: Mark McGwire's historic 70th home run ball from his 1998 season is auctioned off and bought by an anonymous bidder for a "measly" $3.05 million. 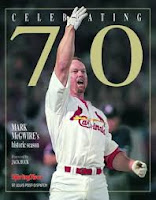 2009: In a historic Hall of Fame election, Rickey "Man of Steal" Henderson gets into the Hall on his first year on the ballot, while Red Sox legend Jim Rice (pictured below) gets in on his last possible and 15th year on the ballot.

Although this stuff is pretty cool, I'm sorry that January is such a dull month for baseball. But at least there's only a couple more weeks until pitchers and catchers report for Spring Training! Thanks for reading this post and I hope you enjoyed it. Check back soon for more of "all the buzz on what wuzz."
Posted by Matt Nadel at 9:34 AM