Even though I'm in college, what would October baseball be without some BwM MLB postseason predictions? So, without further ado, now that the Wild Card round has concluded, here's how I think the 2017 playoffs will go. 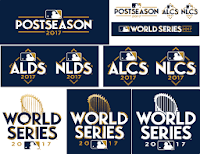 ALDS Series 1: Yankees vs. Indians
Winner in X games: Indians in five
Why? There's only one AL team that can beat the Indians and it just so happens to be the Yankees. Cleveland and New York had the best and second-best run differentials this season, respectively, so these teams give their pitchers plenty of run support. But Cleveland is just too good. If it goes to a fifth game, Corey Kluber is scheduled to pitch, so mark that down as a New York loss.

ALDS Series 2: Red Sox vs. Astros
Winner in X games: Astros in four
Why? Houston is way too dominant at the plate. Sure, their pitching has slumped this season, but they had the best team batting average in baseball this regular season by a long shot and the Sox can't send Chris Sale to the mound every day.

NLDS Series 1: Diamondbacks vs. Dodgers
Winner in X games: Diamondbacks in five
Why? LA is not the team that it was in the middle of the season and we all know how Clayton Kershaw performs in the postseason. Sure, the D-Backs barely have any playoff experience, but the Dodgers don't have much non-choking playoff experience in recent memory. In short, I'm giving this one to the boys in Arizona because of  a well-rounded pitching staff and a strong lineup filled with plenty of MVP candidates that hasn't quit basically all season.

NLDS Series 2: Cubs vs. Nationals
Winner in X games: Nationals in five
Why? It's about time the Nats lift the Washington sports choking curse and this is the year to do it. With an absolutely insane starting pitching staff, a revamped bullpen, a healthy Bryce Harper, and a weakened Cubs team from last season, this is the year for the Nationals to finally win in the playoffs.

ALCS: Astros vs. Indians
Winner in X games: Indians in six
Why? The Yankees are a balanced team and that's why I think they'll go toe-to-toe with the Tribe until the end of their ALDS, but the Astros don't have pitching. Cleveland is just too powerful on all fronts.

NLCS: Diamondbacks vs. Nationals
Winner in X games: Nationals in seven
Why? What a series this would be: two really good expansion teams who've never enjoyed a lot of success in the playoffs. But there is one constant for pennant winners that'll be true again in this series: pitching wins championships. The Nats will outlast the D-Backs because of their All-Star caliber starters, but it'll definitely be a close series overall.

World Series: Nationals vs. Indians
Winner in X games: Indians in five
Why? Plain and simple: World Series jitters in DC. If this World Series were to happen, it'll be exactly like the 2015 Fall Classic: a pennant winner of the previous year avenging their heart-breaking World Series loss by obliterating a team that is just happy to be there. I guess the Mets and Nationals will have more in common than just being in the same division together. Congrats, Cleveland.

Do you agree with my World Series picks? Let me know in the comments section below. Thanks for reading this post and I hope you enjoyed it. Check back soon for more of "all the buzz on what wuzz."
Posted by Matt Nadel at 11:46 AM