In honor of Snowzilla 2016, let's discuss one of the wackiest moments in World Series history. The moment doesn't have to do with snow, but it does have to do with J.T. Snow. You may not know who J.T. Snow is, but he was a solid player for 16 seasons in the 1990s and 2000s, but perhaps his most famous moment in baseball came when he wasn't even at the plate.

The Angels were playing in San Francisco against the Giants in Game Five of the 2002 World Series. Entering the bottom of the seventh inning, San Fran was up, 8-4. With two runners on, one out, and reliever Ben Weber on the mound for the Angels, Kenny Lofton stepped to the plate. On a 2-1 count, Lofton crushed a pitch to deep right center field for an eventual triple. J.T. Snow scored first as Lofton continued to sprint across the bases.

Meanwhile, Giants' manager Dusty Baker's three-year-old son and Giants' bat boy, Darren, went to get Lofton's bat, but didn't realize that Giants' third baseman David Bell was still running hard towards home from second base, trying to score. Snow, however, did realize that and, as soon as he touched home plate, grabbed the young and tiny Darren and swooped him out of Bell's way, avoiding a collision that would have made Dusty Baker's family not too happy. Everything turned out okay in the end, though, as the Giants won the game by a final score of 16-4 and took a 3-2 lead in the Series. However, the Angels came back and won their first World Series in franchise history in seven games. 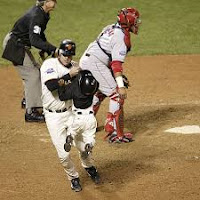 Oh well, Giants fans. At least your bat boy was unhurt and Dusty Baker didn't get yelled at by his family. By the way, if you want to see the play I just described to you, click here. Anyway, thanks for reading this post and I hope you enjoyed it. Check back soon for more of "all the buzz on what wuzz."
Posted by Matt Nadel at 6:50 PM