The Kansas City Royals have won the 2015 World Series and, in honor of that, I'm going to talk about arguably the greatest player in the franchise's history: George Brett!

George Howard Brett played his entire 21-year career in Kansas City from 1973-1993. The third baseman became a staple in Missouri sports for good reason. Brett batted .305 during his career and collected 3,154 base hits, 16th on the all-time hits list. He actually was picked off at first after he got hit number 3,000. He led the league in hits in three seasons and batting average in three seasons as well. In fact, Brett came just ten points from batting .400 in 1980, the year he won his only MVP Award! It would have been the first time someone batted at least .400 in a season since Ted Williams in 1941! Anyway, the 13-time All Star also slammed 317 pitches out of the park and drove in 1,596 runs.

Although Mike Schmidt was just a little better at fielding at the hot corner than Brett, both excellent third basemen are even when it comes to World Series rings. Yes, Schmidt and the Phillies beat Brett's Royals in 1980, but Brett and KC won the 1985 World Series for the Royals' first World Series championship. Brett did really well in the World Series he played in, batting .373 with 19 hits. Because of his exceptional leadership as a member of the Royals and the fact that he destroyed almost every single opposing pitcher he faced, George Brett was inducted into the Hall of Fame in 1999 with 98.2% of the vote, third among position players in terms of voting percentage, only behind Cal Ripken, Jr. and Ty Cobb. 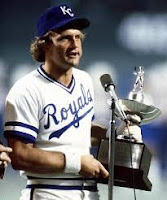 I have a great nickname for Brett: "Mr. Royal." Why? He was just that important to his team's success. Anyway, thanks for reading this post and I hope you enjoyed it. Check back soon for more of "all the buzz on what wuzz."
Posted by Matt Nadel at 8:03 PM