Bobby Valentine managed a few teams from 1985-2012, but his real success came while managing the New York Mets in the late 1990s and early 2000s. In fact, he even led the 2000 Mets to the World Series (which they lost to the Yankees in five games). But arguably his most notable moment in baseball was during a wild extra-inning affair between the Mets and the Toronto Blue Jays at Shea Stadium.

It was the top of the twelfth inning with the score tied at three. Mike Piazza, one of the best hitting catchers in baseball history, was called for catcher's interference, which allowed Blue Jays second baseman Craig Grebeck to reach first base. This call was very questionable, which is why Valentine came out of the dugout to argue the call. He was eventually thrown out of the game by home plate umpire Randy Marsh and was forced to watch the rest of the game from the clubhouse. However, he had a better idea.

Just minutes after being ejected, Valentine returned to the Mets' dugout, wearing sunglasses and a fake mustache, and watched the rest of the game live. As creative and funny as this was, it didn't go unnoticed by MLB executives. The disguised skipper was fined $5,000 and was suspended from his regular managerial duties for two games, but the Mets still won the game in 14 innings, 4-3. So why is this so "important" in baseball history? Well, it's the only time such an event has ever occurred in baseball history, making Bobby V's change of appearance a whole lot more hilarious. 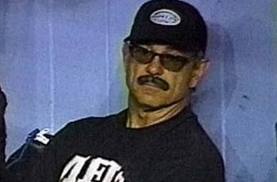 I hope you enjoyed this little anecdote. Thanks for reading it and check back soon for more of "all the buzz on what wuzz."
Posted by Matt Nadel at 5:13 PM