Today, I'm going to continue where I left off in my last post and talk more about the "All-Small Hall" team. In the last post, I talked about my pitcher and catcher, but now, it's time to talk about the right side of the infield, the first baseman and second baseman.

First Baseman: Lou Gehrig
Height: 6'0''
Weight: 200 pounds
Why? Well, he was one of the greatest hitters that the game has ever seen. So, how could he not be on the ASHT? His 2,130 consecutive games played was a record that stood for more than 55 years! But you can't forget his 493 career home runs, his lifetime batting average of .340, and his 1,995 career RBIs. He was, simply, one of the best.
Honorable Mention: Jimmie Foxx 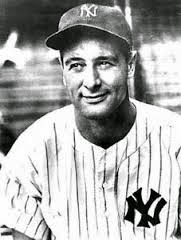 Second Baseman: Joe Morgan
Height: 5'7''
Weight: 160 pounds
Why? Although Rod Carew could have been at this spot, I decided to give the job to Morgan because he was well known for being small in stature and yet he accomplished so much. He was the NL MVP in the back-to-back years that the Reds won the Fall Classic (1975, 1976) and he was part of the NL squad in ten All Star Games. Overall, Morgan was an excellent second baseman, whether it was hitting in the clutch or fielding amazingly.
Honorable Mentions: Rod Carew and Jackie Robinson

Part Two of the "All-Small Hall" team has been completed! I hope you enjoyed this post and thanks for reading it. Two more parts of this series are coming soon, so check back in a few days for more of "all the buzz on what wuzz."
Posted by Matt Nadel at 6:26 AM