I have a book review in store for you today! So, I don't always read fiction baseball novels, but Battery Brothers (see pic of cover below) by Steven Carman seemed like an interesting book to review as soon as I read the short summary on the back cover. Battery Brothers (published by Elephant's Bookshelf Press) focuses on high school senior Andy Lembo, who dreams of becoming the starting catcher for his high school baseball team. His brother, Daniel, meanwhile, is a junior at the same school and already has baseball scouts watching his every pitch because of his incredible performances on the mound. However, Andy faces many obstacles when trying to become a starter, including an abusive father who favors Daniel more, and an absent mother, who scarred half of Andy's face as a kid with an iron. In fact, Andy even loses one of his greatest supporters along the way to his goal of not only becoming the starting catcher, but also winning the state championship. 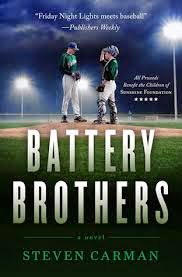 Can Andy find the will to keep on moving towards his goal and escape adversity? Will he ever be as close with his father as Daniel? I know the answers to these questions, but I won't tell you them. Instead, I suggest buying this novel as soon as you can because this book was amazing. The dialogue was intense, the plot was great, and the story flowed very smoothly. You can really get to know Andy Lembo in great detail because of how well Steven Carman (see pic below) pulls the reader into the story. The book tells the tale of a young kid who is just trying to get ahead in life, something I think to which we can all relate. It almost seems like Battery Brothers is happening in reality rather than in the fictitious world that can only exist in books. Overall, Carman's first novel, Battery Brothers, is amazing and I recommend you purchase it right away. If that's not enough, all proceeds from the sale of the book are being donated to the Sunshine Foundation, a charity that answers the dreams of ill and abused children.

I really hope that you go out and buy this book because it's really amazing. I also hoped that you enjoyed this book review and thanks for reading it. Check back in a few days for more of "all the buzz on what wuzz."
Posted by Matt Nadel at 5:38 PM