The Greatest Youngster Around 3/29/13

Let’s get something straight: not all Hall of Famers have a World Series ring. For example, Ernie Banks never got one because he played on the Cubs. Harmon Killebrew almost got a ring in ’65 with the Twins, but never got that close to a championship again in his career. Finally, even the great Ted Williams never got a ring, because he was playing in the midst of the Curse of the Bambino! Anyway, my point is that some Hall of Famers never got to win a World Series, but that never stopped them from being the great player that they were. Now, you probably think I’m going to blog about a guy in the Hall who never got a ring, but you would be wrong. Today, you will be reading about a player who recently retired, never got to a Fall Classic, is considered one of the best pure hitters in baseball history, and is a definite first-ballot Hall of Famer. Ladies and gentleman: Ken Griffey Jr.

Ken “The Kid” Griffey Jr. played for 22 years in the MLB from 1989-2010 for the Seattle Mariners, Cincinnati Reds, and Chicago White Sox. The 13-time All Star was also a ten-time Gold Glove Award winner, dazzling fans with his amazing catches in center field. Griffey is also considered one of the most explosive home run hitters in baseball history. His 630 dingers are ranked sixth all time in career home runs. Don’t think he didn’t hit for average, though, hitting .284 lifetime with 2,781 hits. On a side note, he also drove in 1,836 runs during his career, ranking him 15th on the all time list for most career RBIs.

His career accolades are the following: he was a seven-time Silver Slugger Award winner, 1997 AL MVP, 1992 All Star Game MVP, 2005 Comeback Player of the Year, three-time Home Run Derby winner, four-time AL home run champion, 1997 AL RBI champion, and was selected to be part of the MLB All-Century Team. All I can say about that is wow. However, there’s more! In the 2006 World Baseball Classic, playing for Team USA and being coached by his dad, Ken Griffey Sr., The Kid hit .524 with three homers and ten RBIs. Sadly, the United States did not win the tournament, but Griffey Jr. did make his country proud.

Anyway, as you can clearly see, Ken Griffey Jr. deserves to be in the Hall. He was a great ballplayer for some not so great teams, but what matters is that he was great. 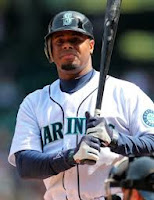 I hope you enjoyed reading this article. It was a lot of fun to write about someone who I love. Thanks for reading, and check back next time for another edition of “all the buzz on what wuzz.”
Posted by Matt Nadel at 12:53 PM