I'm back with another post! Sorry I haven't put out anything in the last few days. School has been pretty tough on me. I hope all of you on the east coast are safe and sound in your homes because of Hurricane Sandy. Anyway, let's get to the post, shall we? Today, I will be telling you all about a player that played during the time of Joe DiMaggio and Ted Williams. This player is not very well known, but is considered by many to be the third best (to DiMaggio and Williams) of his era. Ladies and gentleman, let me introduce you to Cecil Travis. 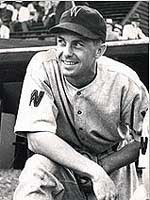 Travis was enlisted into the Army at the beginning of 1942 and served until 1944. Stationed in the States until brought to Europe in '44, he suffered a horrible case of frostbite during the Battle of the Bulge. He had to undergo surgery to prevent amputation of his feet. He was awarded a Bronze Star for his bravery. However, when he came back to baseball in 1945 at the age of 31, he was not the same player. Over the next three years, he batted .241, .252, and .216. He was forced to retire midway through the 1947 season.

His career stats are as follows: 1,544 hits, 665 runs, 657 RBIs, 27 homers, and 23 stolen bases in 1,328 games. Although his career stats aren't pretty, he will be remembered by many as one of the greatest hitters of his era. Had he stayed healthy, he probably would've been a Hall of Famer. He may not be a Hall of Famer, but he is an American hero who should always be remembered.

P.S. - A special shout-out today to Lenny Neslin of the Daily News who convinced me to upgrade my blog's font to a better one for everyone.